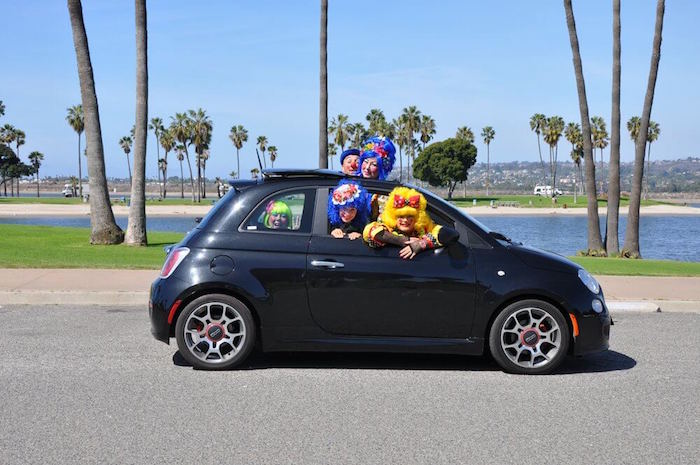 A popular question people have about the clown world is “How many clowns fit in a car?” You can do the math based on an average sized clown into a certain make and model but there is no definitive answer until you know the specifics on the clowns and the car. I never thought that I would get the chance to participate in this well known clown gag personally until I got a call from Frannie the clown. We went to Mission Bay with Free Spirit, Lil Smiley, and Ah OOO Gah the Clown to squeeze into a small fiat and a smart car.

The reason we were to perform this feat was for a photoshoot for the public utilities department of the city of San Diego.  If you did the count, it was five of us getting into the car. We ran around the car a few times and got in few different ways while the photographer took pictures.  It was loads of fun and the final product was a commercial that played on TV and in movie theaters before the main feature.  The title of the commercial is “Full is Fun” and encourages saving water by filling up dishwashers before using them.  It was tight but not too uncomfortable in the car but we certainly couldn’t drive the car that way! We probably could have fit another small clown into the car but we didn’t have one available. The commercial is below for your enjoyment.

How I became a clown

BLUEtiful the Clown in the San Diego Union Tribune!